Candy Land Wiki
Register
Don't have an account?
Sign In
Advertisement
in: Characters, Princesses, 1980s to 1990s,
and 8 more

Princess Loli resides in Lollipop Woods and is the princess of Candy Land. Debuting in the 1980s version of Candy Land, her Princess title was removed in the 2002 version of the game when Queen Elsa became a princess, but was restored for Candy Land: The Great Lollipop Adventure and later versions of the game.

In the game she is described as being gentle, with a voice "soft as cotton candy".

In The Great Lollipop adventure, however, she is shown to be loud, irresponsible, and ungrateful, not wanting to partake in a great honor because she'd rather be off playing. She does, however, redeem herself when getting the stolen wand back, and learns to be responsible.

Princess Lolly's appearance in the 2000s. 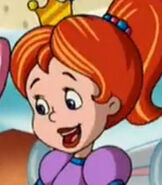